When I started working on Light Bikes, I looked into making the game grid and light walls out of acrylic (especially florescent acyrlic), but found the costs prohibitive. I also didn’t have easy access to the laser one needs to do all the cutting and etching — but someone out there did, and they’ve now made a light cycles set that literally glows:

Took Light Bikes to Spring Fever last week, and got in three big games during the convention’s first day.

Triangle Simulation Society, the ad hoc gaming group in this area, hosts two conventions a year — one in the spring and one in the fall. Here’s some of the shots from Spring Fever

Ships take to the stars in Firestorm Armada

Rocketeers take to the sky in a pulp game

A gaming buddy here has adapted the WWI game Wings of War for Star Wars. His “Wings of Star Wars” premiered at Spring Fever, TSS’s convention in Raleigh.

He didn’t just grab a stack of movement cards from the original either: he created all new maneuver and combat decks in the right scale, with mostly original art, and had bases made to fit his (mostly Japanese-made) ships. He had every starfighter except for the B-Wing, and special cards for all the main characters.

It played as well as Wings of War (not surprising), yet still felt like Star Wars (also not surprising, considering Lucas and ILM based the battle scenes on movie footage of WWII dogfights.) Brian made a few adjustments — X-Wings could link their blasters for additional damage, for example — and added new malfunctions and flavor text on the attack decks to better fit the space opera.

It’s still a work in progress, but overall an awesome adaptation. (All the more so because, back in 1977, when I realized no Star Wars starfighter board game was forthcoming, I tried adapting Richthofen’s War — Avalon Hill’s WWI airplane wargame — to X-Wings and TIE Fighers. At the time, my 13-year-old self didn’t know enough about game design to pull it off, but now I’ve gotten to see that idea come to fruition — and play it.)

Got a nice detailed Speed Rally report from a gamer who’s started running races at their local shop. Here’s the blog blow-by-blow

Charger3604bbl also found a great set of gear markers for the Car+Driver sheets: 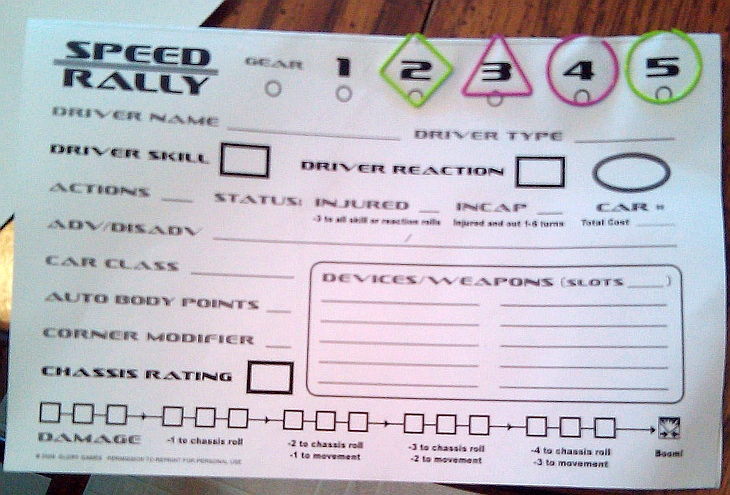 APRIL 1, 2011 — Glory Games is proud to announce the release of their biggest historical miniature game yet: BIG BANG. “BIG BANG: The Miniatures Game” is an exciting new tabletop experience that lets players battle for control of the universe from the very beginning!

Covering the period of history from the creation of time itself to the first full second of existence, BIG BANG is a miniature game like no other. Players field armies of quarks, electrons and protons in an epic clash to form the first atoms, and stand against the hordes of encroaching Dark Matter.

BIG BANG: The Miniatures Game (BB:TMG) comes ready to play out of the box, with gorgeous pre-painted figures. In addition, all of the units in the basic game can be combined to form larger units in later scenarios.

The starter set comes with figures representing electrons, all six types of quarks, and the mysterious “dark matter” — enough for two players to game the earliest events of the big bang, from 10-32 to 10-6 seconds. Later sets will include additional exotic particles, including neutrinos, pions, and quite possibly the ultra-rare Higgs Boson.

The 596-page rule book, with an introduction by physicist Brian Greene, also has options for playing in 10 or 11 dimensions, so both fans of superstring theory and M-Theory branes can face off against one another.

Game play is simple and easy to learn, yet hard to master.
BB: TMG uses the Kinetic Impact System™ to resolve combat quickly.

“What we are truly excited about with this game is scale,” said designer JP Trostle. “The introductory scenario is played on a 1-to-1 basis, about a foot across, which was the actual size of the universe a fraction of a second after inflation — yet you can fit the whole thing in your pocket when you’re done.”

“Best of all, BIG BANG is infinitely scalable, and will eventually include every game ever made,” he added. “We’re already working on a collectible card version, and, of course, a live action role-playing game.”