The Type D is another T-180 that gets very little screen time, in spite of having a “named” driver and a presence in the video game tie-in. A big, blocky monster of a car, the Type D is underwritten by Ekpyrosis/Mutafed, one of the underhanded ‘evil’ corporations in the movie. The main car is driven by Nitro Venderhoss, who can briefly be seen pinning the Mach 6 against the wall at the start of the Grand Prix, seconds before Speed takes out a whole pack of vehicles. Several other Type D’s can be seen during the Grand Prix.

The Type D gets a mention in the DVD bonus feature “Supercharged”, where it is one of ten or so vehicles from the movie showcased in a mockumentary (or machumentary, if you will) about the cars of the World Racing League. It did not, however, get a Hot Wheels. A pity, as anything with a skull probably would have sold pretty well. 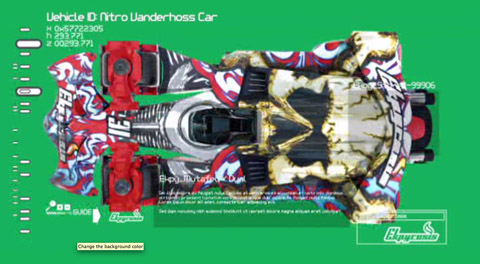 3 thoughts on “The cars of Speed Racer: Type D”