Taejo Togokahn’s sporty street car puts in a big appearance in the Casa Cristo, the grueling cross-country race that is the centerpiece of the movie. As part of the convoluted plot to expose the fixed outcomes of the World Racing League (WRL), Taejo agrees to turn over damaging evidence to the authorities if Racer X and Speed join his team and help him win the Casa Cristo.

Dubbed the “Hangul” — the name of the Korean alphabet — in both video game and press releases, the car’s name is never mentioned in the movie, though Togokahn Motors can be seen printed in both English and Hangul on both this vehicle and the T-180. As Taejo was played by Korean pop star Rain, this was clearly part of the effort to promote the film internationally. 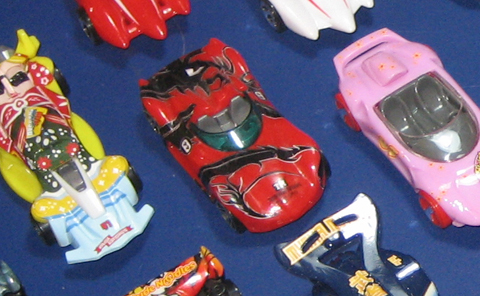 Taejo’s Street Car was a common toy tie-in and produced in a number of sizes: the 1/64 scale Hot Wheels can be seen here, and above is the much larger “battle morph” version. (Photo courtesy of the Speed Racer Wiki.) By the way, while the name is correct on the car itself, Mattel ended up misspelling “Togokahn” on most of its toy packaging, switching the a and h. Details, people, details!

1 thought on “The cars of Speed Racer: Hangul”