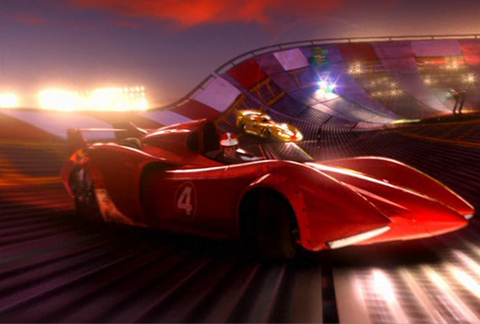 While only seen in flashback at the start of Speed Racer, the Mach 4 is nonetheless an important car in the movie. Driven by a young Rex Racer, the proto-T-180 has a design esthetic that fits in perfectly with the Mach lineage. It is the car Rex uses to teach Speed how to drive, and the ghostly image of which Speed races against in the opening scenes at Thunderhead.

Except for a few lovingly rendered closeups, most of the time the car is seen only as a ghostly blur (Mattel even produced a Hot Wheels version with a translucent red plastic). It is clear though that it has a distinctly retro look, complete with visible bolts and seams — as you can see from this rendering by Phiyen Nguyen.

We’re almost halfway through the garage of vehicles from the Speed Racer movie. The complete, updated list is below the fold:

END_OF_DOCUMENT_TOKEN_TO_BE_REPLACED 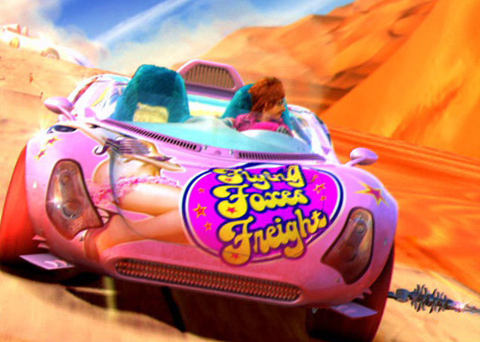 Here are the first of the common “street car” designs from the Speed Racer movie, a pair of tricked out and tattooed roadsters that have a big scene in the Casa Cristo cross country rally. Driven by a couple of vixens from Flying Foxes Freight, the team is hired as headhunters to take out Speed Racer.

The two Type Ls are armed with an elaborate tire shredder (or, as described in the DVD bonus feature, “a telescoping carbon-fiber Christmas tree chop-bit with a reticulating U-joint”), and covered with Vargas-inspired pin-up girls.

With its hot pink chassis, striking decals and candy-apple wheels, the “Delilah” — as the vehicle is frequently identified on toys and games — seemed tailor-made for Hot Wheels. Unfortunately, even though Mattel created intricate tampos for many Speed Racer cars, they dropped the ball on Delilah, declining to produce a car with  pin-up girls on it. (What, too sexy for the kids? Did they see the movie?)

Although the Flying Foxes are soon knocked out of the Casa Cristo, Delilah reappears as a driver in the videogame, with a Type G T-180 players can race.